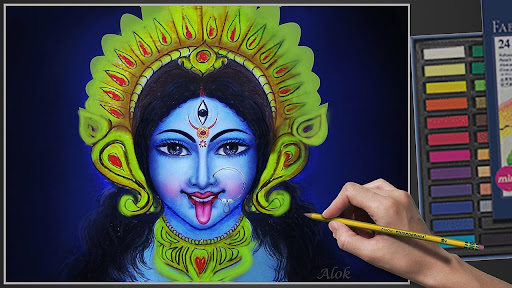 One of the best well-known deities with body modification is the statues of Buddha. Most of these icons were not created until well after his death and are not meant to represent the Buddha, Siddhartha Guatama physically, but they are meant to show his spiritual teachings.

In many sitting Buddha statues, Buddha is usually depicted with long stretched earlobes. It is thought that his long earlobes are connected to the idea of when Siddartha left his life of privilege to become a monk. That the ears represent the weight of his wealth and the material world that he left behind when he began on his road to spiritual enlightenment.

Many Hindu deities are depicted with piercings. One of the most popular Indian divinities is Krishna who is shown wearing jewelry in his ears. Krishna is worshipped as the eighth incarnation of the Hindu god Vishnu and is also considered a god. In addition to earrings, Lord Krishna and his consort Radharani are often shown wearing the ‘Nathori’ style jewel nose pieces.

One especially interesting fact, the earrings he wears are named the Makara Kundanalu, or “the monstrous fish or giant crocodile that poses extinction to mankind when confronted and not overcome,” according to the ancient text, Govinda Lilamrata.

So why is Krishna wearing giant monstrous fish/crocodile earrings? According to the text, the monstrous fish are symbols of the message that when a person overcomes their deadliest fears and tames them spiritually and physically, only then can a human be elevate-d to the level of a God. The legend also says that when Radharani, Krishna’s consort saw Krishna wearing the fish earrings their brilliance dazzled her and she became overcome with love for him.

Parvathi is another popular Hindu goddess in India as the goddess of marriage, beauty, love, bravery, harmony, fertility, children and devotion. She also has divine strength and power. She is often shown wearing a nose hoop and chain through her left nostril. In Ayurvedic medicine, the left nostril is associated with fertility and the female reproductive organs.

Many Hindu women in India today still pierce their left nostril in honour of Parvathi and this piercing connected to a gold chain is very popular as Hindu wedding jewelry.

Ganesha is another popular pan-Hindu God, worshipped as the remover of obstacles, god of intellect, wisdom, and bringer of good luck. Although not known for his piercings & body jewelry he is usually shown with an elephant head riding on a mouse, which is an extreme form of body modification. As the god of beginnings, he is often honoured at the start of Hindu ceremonies.

If you are interested in unique piercing ideas perhaps you can find some inspiration from these deities for your next piercing. For more information on the healing process & healing time of piercings including septum piercing, navel piercing, and naval jewelry get in touch with Sage Piercing. Our experts can talk you through the process and help you find navel jewelry to match your style. Book your session today.